Part of the THIS IS THE MOMENT series

With so little time to write these past few weeks, I resorted to leaving memos on my phone, a function I’d never used before.

“This is the first time that I use Voice Memo on my phone, and I’m actually lying in the bath tub while I dictate this, and it feels kind of funny because my writing voice is a silent voice, it’s the one that only I hear in my head, or only you hear in your head, transformed, as you read my words, but still, I’ll give it a go.

Umm…this is the second Christmas since my diagnosis and I was thinking of the difference between last year and this year and how great a voyage I’ve been on. Last Christmas I was only a few months in—it was the beginning of my 4th month—and I went to the different family events wearing a wig—that wig that I hated so much—and…feeling not myself, feeling disguised, feeling that this was not my life. I hadn’t grown into it yet, I hadn’t experienced enough of it yet, and so I felt very shy or very insecure, even though it was all of the faces of the people I love and who love me. Some were being very careful, especially in Sylvain’s family because we were only four months into the end of our marriage, our separation, but they were kind.

with the effects of being immune-suppressed, so I was really sick in December and a sick that isn’t cancer—which is no bother at all until you’re in chemo or until it starts to get very aggressive and nasty and so far I’m not there—um…but I was sick from being immune-suppressed and caught the norovirus which made me so ill—vomiting and diarrhea, one round, a second round—and leaving me very weak and…thinner, which wasn’t all bad because all my clothes looked really nice [laughter] and it’s not a scary thinner, just…reality—the reality of not being able to keep down enough food or to not have enough appetite to eat more food, um…which is being challenged right now, which is being reversed, I think…

But this year, the first Christmas celebration, which was the Daoust Christmas, where we were well over 30 people in a small house and where we were all one on top of the other, was actually one of the nicer Daoust Christmas’s I remember—they were all pretty great, but this one, I was myself, and that’s because I was a changed Michelle, 16 months in [that sounds contradictory, but it’s a fact]. And, there I was with no wig and something that was more true, I think. Sylvain has travelled 16 months without me, and I without him and there’s a truth to us that was not there before when we were busy running away from each other or being unkind to each other, and it felt good to be coherent, to be…in sync inside and out, and everyone was wonderful. 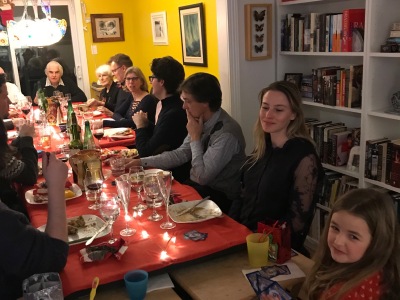 And I think that when you’re in a place that feels grounded in something real, and when you feel unafraid to show yourself as you are, then good things happen. Embraces feel…the energy transferred in hugs and embraces is much more positive because nothing is getting in its way, and I’ve never hugged so many people and I’ve never felt more…all my impulses were to be open and to love and…I don’t always feel like that. I can be as petty as everybody else…

And then there have been all my cooking marathons with Simon. Yesterday, which was the 26th, we did the Christmas on my side of the family tree which has all kinds of grafted branches on it now. My mum’s partner Claude has been with us 20 years  and gradually we just grafted more and more family members from his side, and now Christian with Vickie…we’ve grafted Vickie onto this beautiful tree that’ll yield different fruit depending on which branch grows and…bears the most and…yesterday there was a new member, Guy Bolduc, who is Claude’s daughter’s new love, and this is the love of two people in their fifties and yet it feels as sweet as if they were in their twenties.

And  of course with Simon as the cook and me the assistant, well, there was more food than you can imagine and not enough ovens to warm it all in but all it did was make everybody feel wonderful and they just ate and ate and ate and ate until there was nothing left, and we exchanged gifts, and it was chaotic and it was wonderful and…my Mum couldn’t find her boots when she was leaving but of course her boots were right in front of her and Claude’s son Michel couldn’t find his coat but it was just underneath another coat on one hanger [soft laugh]…And all these crazy things, and yet everybody walked out the front door smiling and laughing as they left after a very long and terrific evening.

I think you could say that the stars of the evening were of course my grandchildren, of course Penelope and Graeme, but I think Vickie, and I think Pastou, her beautiful little toy poodle that the kids go crazy over…And my sister Danielle was there and was like a magnet to Penelope and Graeme with this wonderful strong energy she has and I think for the first time I felt how easily I could disappear back into the ether—not tomorrow, I don’t want to and there’s no reason to—but I felt the strength of all the bonds in this family on either side, and how much joy there is, how much genuine love of each other and desire to be together, and…none of that has anything to do with me. It has to do with the chemistry of all of us. So it has to do with me in the tiniest proportion…and that’s okay, because when I leave this earth, there won’t be as much pain; there’ll be a sad transition maybe, and then life will go on and all these people will keep being good to each other and helping each other out—mothering each other I guess is the way I could put it.