After thirty-four years in this house, we’re slowly but surely taking our first steps toward leaving it (I know, 34! Honestly, we were very young when we moved in).

When I say we, I mean my husband of course, but also my sons—especially Simon and Christian—because we’re all bound up in what comes next. Simon most of all, because though he has lived away from us for quite a while now, this reconfiguration of the future was his idea.

A few years ago, he floated the notion of all of us investing in a multigenerational living space. A subdivided house, a duplex, a triplex—anything that would allow us to live with privacy in proximity to one another; a super-home where Simon could gain solid footing in the real estate market, a more permanent roof over his head, and live a life most suited to his values and vision of human ecology: shared space, shared costs and community. The window for making this happen is two to three years.

It has always sounded right. All of us have looked at the horizon, trying to imagine the shape of the world to come, and experienced a shiver of apprehension and a feeling that our futures will be better faced in solidarity. Together.

Together is a word that right now means as many as six of us. When I’m gone or when my husband’s gone, together will still mean…who knows how many people? In some future iteration, it could include Christian and his family, and Penelope and Graeme and their families. Anything’s possible. It’s a word signifying that life is better lived among loved ones. In proximity.

I’ve noticed a change in myself since Simon’s idea began to germinate. My connection to this house, which has been the centre of gravity of my entire adult life, is weakening, and that’s helping me to tug at the roots that ground me to this place. The pain isn’t as acute as I feared. I don’t know what it’ll be like the day the moving truck pulls up and all we leave behind are scuffed floors and nail marks on the walls, but lately, the thought of moving away has taken on the aura of liberation.

Our warm and welcoming little house is dragging me down with the sheer weight of all of the stuff that has accumulated inside it. To quote Sheldon Cooper, it has become “a swirling vortex of entropy”. If left to our own devices, we’re each capable of filling any room, any free space with stuff at a remarkable speed.

With the exception of my husband—whose contribution to burying us alive is related to his difficulty throwing out or giving away things that still have monetary value (at heart, he isn’t a packrat), resulting in a crammed crawl space in the basement—Simon, Christian and I * are all afflicted with the ultimate room-filling compulsions: bibliophilia and cinephilia.

[*My married son Jeremy is very neat and orderly—I often think how he must have suffered, growing up, from the effects of our shared talent for agglomeration.]

Simon’s apartment is just like our home, with walls hidden by photographs, artwork and overstuffed IKEA bookshelves that are doing fine with his huge DVD collection, but straining under the weight his books.

It must be genetic.

But consider: the photos are of people we love and places we’ve been; each painting or piece of art has personal meaning, including a laminated poster of the 2007 Montreal Jazz Festival where Christian performed when he was 16, and oil paintings created by my aunt. We don’t hang things because they match a room’s colour scheme. The DVDs represent hours spent watching and re-watching them together. And the books? I know that Christian, Simon and I have no interest in seeing walls. I know that all three of us (as well as our friend Cindy who is part of our super-home project) envision rooms encased with floor to ceiling bookshelves (she builds them!).

On one side, there’s the consumerism of this century that I want to run from, and on the other, its antithesis, a movement toward decluttering, minimalism and micro living environments.

There’s a beauty in the latter: the order, the simplicity, the detachment, the shedding, the room to breathe.

I can look at examples of minimalist spaces and the minimalist lifestyle and admire their aesthetic, but then my mind revolts, and what was fresh and cleansing very quickly becomes bleak in its blankness (imagine coming in from the cold of a snowy winter’s day to a white box that passes for your home), clinical in its austerity (like my dentist’s recently redesigned workspace) and devoid of everything except the rarest of personal items.

And that’s the rub. In the spaces where most of my family members live, meaning and material things are bound together through the pathways of sense memory. We feel compelled to live in very personal, evocative environments in which objects reflect and remind us constantly of who we are. This isn’t nostalgic or narcissistic, but rather, I think, a nesting, comforting behaviour. This is who I am because these are my loves.

My sister Danielle moved here from the West Coast earlier this year, months before finding a new place. When she did, and the movers’ truck finally arrived and we helped her to begin unpacking, I was reminded of this desire to recreate the familiar. This was my Facebook post the following day:

[…] Danielle left her life in BC behind and is finally settling into her new nest.

This is the stuff that made it to Quebec, except for the furniture, which has of course already been spread throughout her new place by the friendly movers.

This is what a lifetime of baggage looks like–once you’ve sorted through it, evaluated its worth and decided that it will follow you to your next destination across a continent.

Every box that’s opened tells a story. Out of every box floats an echo, a hundred memories.

With every box come the beauty of music, the pleasure of books, the familiar feel and smell of clothing, and tchotchkes–those tiny, useless, priceless mementos of the struggle to have a full, rich life.

The unpacking of the tchotchkes mattered. We stored them in a large glass cabinet in her new living room. Each was dusted off and placed on a shelf with great care. Minimalism, shminimalism.

A few years ago, I came across a little book about a big question. It’s The Burning House, and it asks: if your house suddenly caught on fire, what would you grab as you fled out the door?

We’re spared some tough decisions thanks to our laptops. With those tucked under our arms, photo albums could be left behind without too much anguish, I think, but what of the rest?

I’m not a phobic person, and yet I often find myself spooked by thoughts that one day, I’ll be driving home from work and see charcoal plumes billowing from our cottage. The fact that our house is sixty-three years old plays a part, but it must certainly also have something to do with The Burning House question. What I would grab seems less significant than what I would MISS.

The burning house scenario is the experience of most immigrants, no matter their status upon arriving in their new country. They’ve left so much behind. Nothing is familiar. What do they ache for and what is most precious? 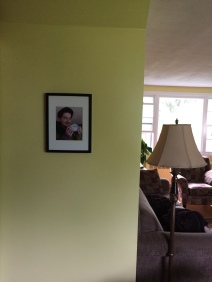