It’s been a weird weekend.

Last Thursday, our passage from winter to spring took an unwelcome turn. A rainstorm washed in and dumped a record-breaking number of centimetres of water onto ground that was still frozen. That’s a rotten recipe.

From Thursday morning through Friday night, rivers overflowed their beds, sump pumps failed and hundreds, if not thousands, found themselves ankle deep—or worse— in water in their own basements.

We were among them, and that Thursday vigil by the submersible pump (borrowed from my saintly brother-in-law), in the damp and cold basement, was a long, lonely night.

Hardly the ideal circumstances leading up to a trimestrial Saturday gathering organized by my son Christian, this time named:

Best of the Worst (BOTW to the initiated):

Inspired by the fellows at Red Letter Media, Christian has made the event his own.

I’ve been struggling to remember how long we’ve been at this. At least four or five years by my count. Christian is a combination movie buff and collector of trivia and esoterica with an elephantine memory. Mix this with a tight group of friends who are each as nerdy, sharp-witted, good-natured and crack-me-up funny as the other, and you have the makings of a rosy tradition.

The basic formula of a BOTW evening is simple: Christian selects two films from the vast and shameless videosphere of intentionally, ironically or accidentally terrible movies that are so bad, they’re good. We watch them together, eat, drink and, when it’s over, vote for the “best” bad movie. The BOTW. More recently, Christian has added some pretty terrific Pub-night style movie quizzes that are the extra fun between viewings.

There’s real artistry behind Christian’s soirées. It takes a deft touch to get the balance just right: to create an atmosphere in which hilarity offsets mockery, and in which a genuine sympathy for endearing cinematic intentions gone horribly awry prevents the mix from souring. At his BOTW evenings, scripts and scenes are usually in such awesomely, spectacularly poor taste and effects so cheesy, that you just can’t help but deride them with glee and genuine affection. It’s often hard to hear the movie over the guffaws and running ribald commentary of the BOTW gang. 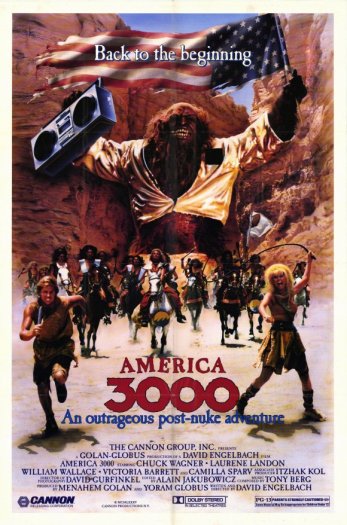 I get to attend because this house is still the only Daoust venue big enough to hold and host everyone who has now been drawn into Christian’s and the event’s orbit.

Last evening, while Megaforce and America 3000 were filling the darkened space, I surveyed the room, and it struck me how unlikely a bunch we were, and how many mutations this group has experienced. The tight nucleus of Christian’s college friends, which also drew in his brothers—especially Simon—now exerts an unpredictable gravity.

Among those packed like sardines into my living room were Cindy, who was first the friend of a friend of Simon’s, but who is now, well, family, and who arrived with Raouf, who in the beginning was her lodger and is now her friend, having come to Montreal all the way from Egypt to complete his MBA. This was his second BOTW evening, and he was better prepared for the mayhem.

Then there was Thomas, in Montreal from the Maritimes to start his first job eighteen months ago, who was originally my French student but integrated my sons’ lives first through sheer necessity and then, in amity. He’s now a BOTW veteran.

There were Pat and Patricia, the world’s most convivial couple, who both work and teach at the same college as Simon, and fill every room they occupy with joy and energy. They get along with everyone.

There was Alec, who grew up in the house on the corner but alternates between two different living spaces, miles apart, and whose presence is both constant and sphynx-like, though his knowledge of movie trivia is spotty.

There was Saran, a former student of mine and wonderful person. Now in Montreal after studies in London, England, Saran works in I.T. He was very brave to accept my invitation. He couldn’t have known what he was walking into but then, he is an explorer at heart.

Last time, my son Jeremy was able to join us and this time, it was my daughter-in-law Anne’s turn. Their integration was seamless.

Our evenings have seen couples come, go, and reappear in new configurations. They’ve welcomed every new person one of us has wished to include. The only limitation is the size of my living room.

Among Christian’s friends, the regulars: Rainforest, Owen, Danieli, Pavlo, Li, Stephanie (and now Marco), there’s an understanding, I think, that BOTW evenings constitute the beginnings of a tradition—a promise to be kept as often as possible—a means of acknowledging the depth of friendships and solidarity in this world.

As always, change is imminent.

Thomas is leaving in a few weeks for Sudbury, Ontario, to begin a Master’s degree in Geology and find a new life path;

Rainforest, one of Christian’s original college friends, is in the process of choosing the university where he will next begin doctoral studies in Game Theory. His options include California;

Christian will leave Montreal at the end of July to take up a three-month posting at an inlet on Baffin Island;

Owen is just about to become a Fine Arts graduate and head into his school-free future;

I don’t know how long we’ll be able to keep Saran in Montreal, but as long as he’s here, he’s a BOTW alumnus with an open invitation.

The world has become a much smaller place, and few of us dare to scrutinize the horizon. Instead, we turn to each other seeking companionship, friendship, a port in a storm, meaningful connection and best of all, the bonds of laughter.

One thought on “MAKING THE BEST OF THE WORST”