Last week marked the 60th birthday of someone very close to my heart.

There’s a familiar pattern and flow to “milestone” birthdays. Hitting any decade sticks out like a signpost against the backdrop of our lives, and feels weightier, as though somehow, thirty were more substantive than twenty-nine or thirty-two; fifty any different than forty-eight or fifty-one. Invitations are emailed, phone calls made, a reception room reserved, photographs collected and scanned. This is the ritual.

I’m resistant to the milestone birthday concept and have been for as long as I can remember (except maybe number 18, which opened so many new doors). Marking the passage of years and then decades seems like self-brainwashing—like self-inflicted neuro-linguistic programming:

The higher the number of the milestone birthday, the greater is the focus on looking back and taking stock: Look at where I’ve been; look how far I’ve come; look at everything I lived through (and survived!). Here, my wedding day; there, the births of my children, the deaths of loved ones.

The surgeries, the summer trips, the mundane biographical moments caught on camera that have meaning only to the handful of loved ones who were there, and even then, will recede in value as their subjects age and fresher memories are made by younger people.

A list of events seen through a nostalgic lens: It all went by so fast.

I’m not a great fan of nostalgia, though every now and then, I’m gripped by a sudden and intense longing to re-experience feelings from the past, to excavate sense memories like the softness of the tops of my children’s heads against my fingers and the curves of their fragile skulls when they were babies; the feel of their bodies against mine when they were in my arms; their tiny hands settled in my palm with such trust when we went walking; the experience of feeling crazy in love with their father and knowing only joyful optimism…

There are times when I feel like I would give anything to hear the young voices of my sons again, their distinctive speech, and watch their small faces that were full of sweetness and innocence as they spoke—in which not a glimmer of the sharper bones of manhood could yet be guessed at. 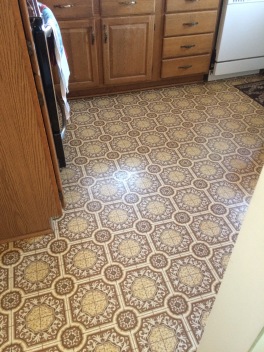 A thing as banal and lifeless as my kitchen floor is a doorway into the power and cost of memories. It was there 34 years ago—freshly installed by the previous owner—when we bought this old house. It was ugly even then. There used to be a tiny corner table in the kitchen, and it’s where I bathed my infant twins every morning, warm water splashing onto the floor as they kicked and thrashed. Through the years– from high chairs to kitchen chairs–chunks of spaghetti, splotches of applesauce and crumbs of everything edible that entered the house formed temporary mosaics on its surface, miraculously disappearing into its ugly pattern. When we eventually removed the corner table, we left behind the holes in the linoleum, undisguised. With no porch space between the kitchen door and the world outside, we tracked all of the grit of the outdoors back into our house and onto the floor. New appliances we brought in, making fresh indentations on its surface next to the old ones. I cooked thousands of meals over it, slopping and spraying ingredients onto it as I went. I still get down on my hands and knees to wash it.

I hate that floor, but the story of why it’s still there is also telling. It speaks of the modesty of our means, especially when we first started out. It speaks of harder times when the boys were older and there just wasn’t enough money. It tells of a terrible, painful time when our baby died and a pall fell over the house that I had, until then, thought of only as a safe cocoon, and which I began to love less. It documents the abandonment of certain dreams, and an exhaustion, a turning away from what, to me, was no longer desirable.

In spite of how intensely beautiful some remembrances are, I would never want to go back in time. My memories are a laminate composed of innumerable experiential layers. They’re what’s made me stronger and more human and I know that they can’t be peeled apart and separated one from the other. They can only be added to.

Time travel has no allure for me.

How could I go back into the past without losing most of what I’ve learned and come to understand over time? It would be like trying to fit myself back into size 5 clothes. It would mean being painfully reduced.

Time seems to be passing more and more quickly as I grow older.

This is said and heard so often that we accept it as canon.

I understand why most of us feel this way. It comes as we begin to brush up against our mortality.  My lifetime went from being counted in years to being counted in decades, and those are piling up. The sense of the end of my days is no longer a vague and amorphous thing hanging somewhere out there in the ether.

But I honestly don’t feel that time is speeding up. And I don’t feel like the days were endless when I was a child (though summers sure seemed to be). Something altogether different is happening. In recent years, I’ve begun to feel squeezed by time.

My problem is one of perception. It seems to me that for the first thirty-five years or so of my life, all I did was keep my eyes on the horizon because there was always something out there I was after: every project, every choice was about moving forward and building the future I would inhabit with my family. And everything else flew by, just like the scenery did from the back seat of the car when I was a child.

And then, not long ago, my foot came off the accelerator, and I began to see that I’ve arrived. I’ve reached the place where I want to be. All of the pieces seem to be here. There’s family, closeness, love. There are the new sprouts: my grandchildren. There’s friendship, deep and intimate. There’s work that it took me years to find and that’s a little like standing in a stream that brings the whole world to me. There’s art and science and travel and learning, as immediate and accessible as this laptop. There’s reading and there’s my writing.

Instead of looking far off into the distance for the future I want, I now too often find myself straining to find large, open spaces of time, like gaps in the calendar, that I can stretch out in, where I’ll be able to write more, read more, travel more, experience more.