In my last year as a history undergrad at Concordia University, I wrote a paper about Canadian identity, specifically about our «northern-ness», and how the North—more than any other criteria in the «What-makes-Canadians-Canadian» debate—defines us and has shaped our culture.

I think back on those years and smile. Undergrads can churn out essays like nobody’s business. And if memory serves, the ideas were far less important to our professors than how we articulated them (that was a big verb in those years) and structured them.

Even as I handed it in, I remember feeling that it was a purely intellectual exercise. My belief that there is such a thing as a Canadian identity was still far more visceral than rational. And yet, that’s among the papers I remember most clearly.

It’s presently 6:23 on a cold winter morning. The sun won’t be rising for another hour. The walls and windows of the house crack and make subtle banging noises as hot-water heating 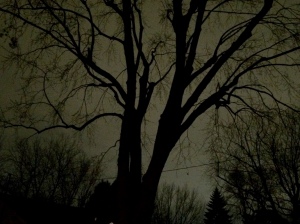 pipes, frames and panes react to contrasting heat and cold. The furnace has been running for hours and hours, on and off but mostly on, because it has been very cold, minus 17 ° Celsius (1 ° F) and this old house just can’t keep in its heat.

It’s pitch black, but it isn’t. And you can’t understand that unless you understand northern winter skies, which are never completely dark. Because the night sky over my house is actually white: dark white, which makes no sense until you see it. But it is. And in spite of the fact that there’s still not a hint of sunlight in it, you can see the clouds that overlay the basic whiteness of the sky. Dark blue whiteness.

My IPhone camera just can’t do it justice, which disappoints me.

I wrote about our Christmas Eve weather in a previous blog: about how the temperature climbed up to 17 degrees  (63 ° F). That was crazy weather that’s nevertheless slowly entering our climate-changed collective consciousness here.

Not long after that though, normality returned. A snowstorm blew in and dumped 40 cm of fresh white snow on the ground. It’s gorgeous. Tree branches, rooftops and even roads were covered. White streets are just the prettiest thing.

People shoveled driveways and front walks. They cleared the snow from their cars. Those who live closer to downtown found their vehicles buried and jammed-in by packed, plowed snow.

Many people in Quebec hire contractors to come clear their driveway in the winter, usually getting together with their neighbours for better service (and a better price!). This didn’t exist when I was growing up, but I like the industriousness of it (a few entrepreneurs understood that you can establish a decent business doing this) and the job creation. But it says something about our changed lifestyle too: no one has the time; everyone is pressed to get to work, to school, to daycare. Or isn’t fit enough to shovel.

My wonderful neighbor John revved up his big, heavy, noisy snowblower and cleared his driveway, then his next door neighbour’s, then ours. He kept going till he was too tired to continue. Such kindness is the stuff of angels. Or Frank Capra movies.

Earlier this morning, I heard the voice of Mike Finnerty on CBC radio (he’s fantastically good at his job) explaining that temperatures are now on the rise again, and that by Saturday, we’ll be back to +5° C.

That means that my furnace will get a bit of a break (and my Hydro bill too), but that we’ll lose a lot of the snow that adds beauty to the landscape and provides acoustic peace in a leafless winter world.

It also means a temperature swing of 22 degrees in a few days.

What kind of people live with these kinds of major shifts in the environment they blithely walk around in most of the time?

Canadians do. Well, almost all of us. Except for the folks on the lower West coast, and Torontonians—historically at least (recent meteorological history has destabilized them too).

A lot of our culture comes straight from the U.S. Most of it, probably. But not our weather culture. That’s 100% ours. And I’m pretty sure that no one, anywhere else in the world, does weather the way we do.

Weather—or météo, as it’s referred to in Quebec—is one of the most important modules in beginner level French classes for adults. Understanding forecasts is crucial, and newly arrived immigrants need to pick up the skill fast. Being fluent in «weatherese» means knowing which clothes and how many layers you’ll have to put on or take off during the course of the day; what your children need to wear to school (especially in the schoolyard) ; how long your commute will be and how many public transit delays are likely. It also means being able to start a conversation with anyone, anywhere. 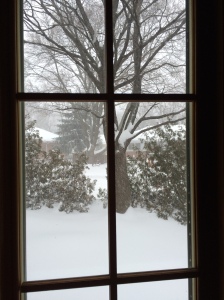 Montreal winters can get so cold that people migrate below ground and work, stroll, shop and socialize in the heated underground city (actually, an indoor city); and Montreal summers can be so hot and humid that the same climate-controlled spaces beckon once again. It’s a wonder there’s anyone in the streets. And yet, outdoor terrasses everywhere are packed and lively.

Many years ago, in late March or early April, I wrote a letter to my younger sister who lives in Coquitlam, BC. It was a year when winter was long and spring’s arrival was incredibly swift. I must have waxed poetic about everything going on outside in « the weather ».

Not long after, I received an email from her, which read like a long sigh, asking me to keep writing to her about these thing, telling me that she missed the changing seasons and longed for those natural rhythms and shifts.

Surely, we’re changed by the climate and the weather we live in.

A winter gale brings the skin pain and bone-deep shivering of «wind chill», but on a steamy summer day, you can find a shady spot, close your eyes and feel the strong, cooling wind on your skin, hear it hissing in the trees, and feel truly happy.

There are summer days when the scorching sun—that even my South Asian students are distressed to feel burning their skin—is so merciless that the only place to be is at the shopping mall or in the water. But on a frigid winter afternoon, when the sky is the clearest, driest blue imaginable, you can find a sunny spot at home, by the window, and sit there like a happy cat, soaking up the warm rays, your face turned, flower-like, toward the golden light.

With each equinox, our homes become bellows as we shut our windows tight in the fall to keep the chill wind out, trapping the smells of harvest cooking, only to fling them wide open in spring to let in fresh air and birdsong.

Every summer, sitting outside on the lawn and listening to the birds (and a lawnmower or two),  I have a moment when I look around me and think:  I can’t believe that in a few months all of this will be gone and I won’t be able to sit out; there’ll be no leaves on the trees; I’ll be spending my days indoors, and going for a walk will feel like an impossible memory.

And then, in early spring, I’ll look at the trees and I’ll will them to sprout the leaves I love so much, while dreaming of green, green, green;  and I’ll feel like bursting with optimism when the first flock of migrating Canada geese flies over the house.

What have I learned from the weather? Adaptability, I think. Maybe that’s part of my Canadian, northern identity.

An acquired acceptance of change?  The ability to shift my perspective?

To everything there is a season.

4 thoughts on “STUDENT OF WEATHER”