We’ve all seen–in real life or on screen–a small child peppering a wilting parent with the question: Why? But why, Mummy? Why daddy? Why do….? Why is….?

For the most part, parents keep their cool. Some—the really attentive ones—listen carefully and try to come up with an answer that’s in some way informative or at least one that will satisfy the child and put out the fire for a while. But some children have serious stamina, which wears their parents down to defeated shrugs and sometimes a state of exasperation.

Buried somewhere in every parent’s psyche is a fear of the questions themselves. Of not being able to answer them. Of not wanting to answer them. Of being exposed as an imposter (parents are supposed to know everything). Or, finally, of being asked the sort of profound philosophical questions that children are capable of throwing into a simple conversation, like: What is heaven, mum? What do you think it’s like?

Here’s the story behind those last two questions:

On a steamy summer afternoon when they were maybe 8 or 9 years old, I took my twin sons out for a drive. We were chasing a thunderstorm, which was my idea. We were following the lightning along the lakeshore (you could get a good clear view of it from there) because they were afraid of it, and I didn’t want them to be afraid. So we hopped into the car (a very safe place to be when there’s lightning!) and storm-chased.

WOW! Look at that one!

Oh! There’s another one!

It was so exhilarating. The wind blew and the darkened sky was lit up by bolts and sheets of lightning, with very little rain. The thunder rumbled and they kept pointing at new flashes. In a very short time, their feelings of uncertainty evaporated and were replaced by joy, and a happiness of the purest, simplest kind.

And that’s when those questions came up. What is heaven, mum? What do you think it’s like?

They now hung in the air. What could I answer?

Maybe it was because of the wondrous sky. Maybe it was because they felt, as I did, that this was a rare moment. What I remember most is that we were connected in that instant by a feeling of transcendence. All I know is that my answer came rather easily, and I still feel that I got it right (or at least, I can live with it).

What I answered was something like: «Well, I don’t know. No one really knows until they die. But here’s what I think maybe it is. How do you feel right now? »

And I said: «Do you feel like being mean? Like saying something that could hurt someone? Do you feel jealous or angry or frustrated? » 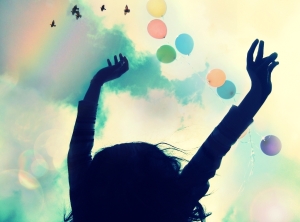 And I answered: «Well, I think heaven must be like that. I think that when you’re in heaven, you always feel happy like that; you feel full of love. »

And to my tremendous relief, that was enough for them, and they just smiled, and we made our way home.

I think that our questions say a lot about us. They provide a window into our

preoccupations, our fears, our passions and our interests. They’re indicators of our inquisitiveness and of the life of our mind’s imagination and appetite for input.

Asking a question is always, in part, opening yourself to another—and perhaps even leaving yourself exposed. Which is why I think that our questions say something about the trust and confidence we have in each other.

Which is my long-winded way of introducing a new category on REEF. A new place to visit I named CHRISTIAN’S Q & A.

Some people never stop asking questions. My son Christian is one of them, and he can be relentless. You see, the gears of his creative brain never stop whirring and apparently, he has freakish recall (which serves him well as an actor!) and a capacity to store almost limitless amounts of information, factoids and esoterica. He’s also a cinema, comic book and graphic novel aficionado.

And so, just for fun, just to make conversation or just to watch me squirm, he throws these questions at me, when the mood strikes him.

Sometimes he gives me a headache, but mostly, he makes me feel good because he genuinely appears interested to know my answer.

The coolest thing about Christian’s questions is that under their geek culture cover, they’re actually challenging and expansive. Sometimes, they are so much so that I flip the question back at him so that he has to answer it first, just to give myself some time to think or in the hope that his answer will spark my own imagination.

I’ll end this post with a question Christian asked me yesterday. See what you’d answer, and then come back to REEF, and leave your answer in a Comment.  I’ll post my own answers…in time (maybe I’ll wait for yours, first).

QUESTION 1: If you had the ability to teleport, how would it change your life?

For example, the character of Nightcrawler, in the X-Men comic series.