When I left Montreal, it was with one overriding purpose: to be there for Christian’s final performances at LAMDA and for his graduation ceremony.

I went alone, but I was carrying with me the best wishes, the break-a-legs, the excited anticipation and the love of a great many.

For the first part of the day, I was on my own again, in a kind of maternal limbo. But Ifigured that what worked the day before would probably work again, so I set out for South Kensington, this time to visit the Museum of Natural History, which is across the street from the V&A.

I’m so happy that I did. The MNH is a wonder.

And a temple of scientific tradition and most especially, a shrine to Darwin and to his legacy, where I found everything I expected including, of course, the fossils of giant dinosaurs.

But what I knew nothing about, and almost missed (it needs to be advertised much more vigorously!) was Cocoon, the monumental new scientific research center/curated biological archive: a dazzling, giant ovoid structure and exhibit.

I was so moved by the beauty of Cocoon. And by its optimism. And because of the magic of cell phones, I was able to share it all with Simon, another of my sons who is a biology professor at a college in Montreal, with whom I messaged my way through it all. 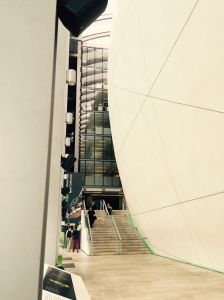 And then it was evening. I made my way to LAMDA’s Linbury Studio on Talgarth Road, to see the D’s production of Romeo and Juliet (the D’s are the students enrolled in the Masters in Classical Acting program), and especially, of course, to see Christian play Tybalt.

I’ve developed such a love for theatre, living alongside Christian. He has taught me so much…

About the alchemy of performance and the generation of an energy so electric and immediate that it makes everyone’s heart race;

About the beauty of text and its embodiment;

About  fearlessness and abandonment;

About the discipline and hard work required to create the illusion of effortlessness;

About risk taking and creative collaboration.

About the universality and timelessness of the dramatic arts.

“I’ll have grounds
More relative than this—the play’s the thing
Wherein I’ll catch the conscience of the King.”

(Note: All photographs are mine)